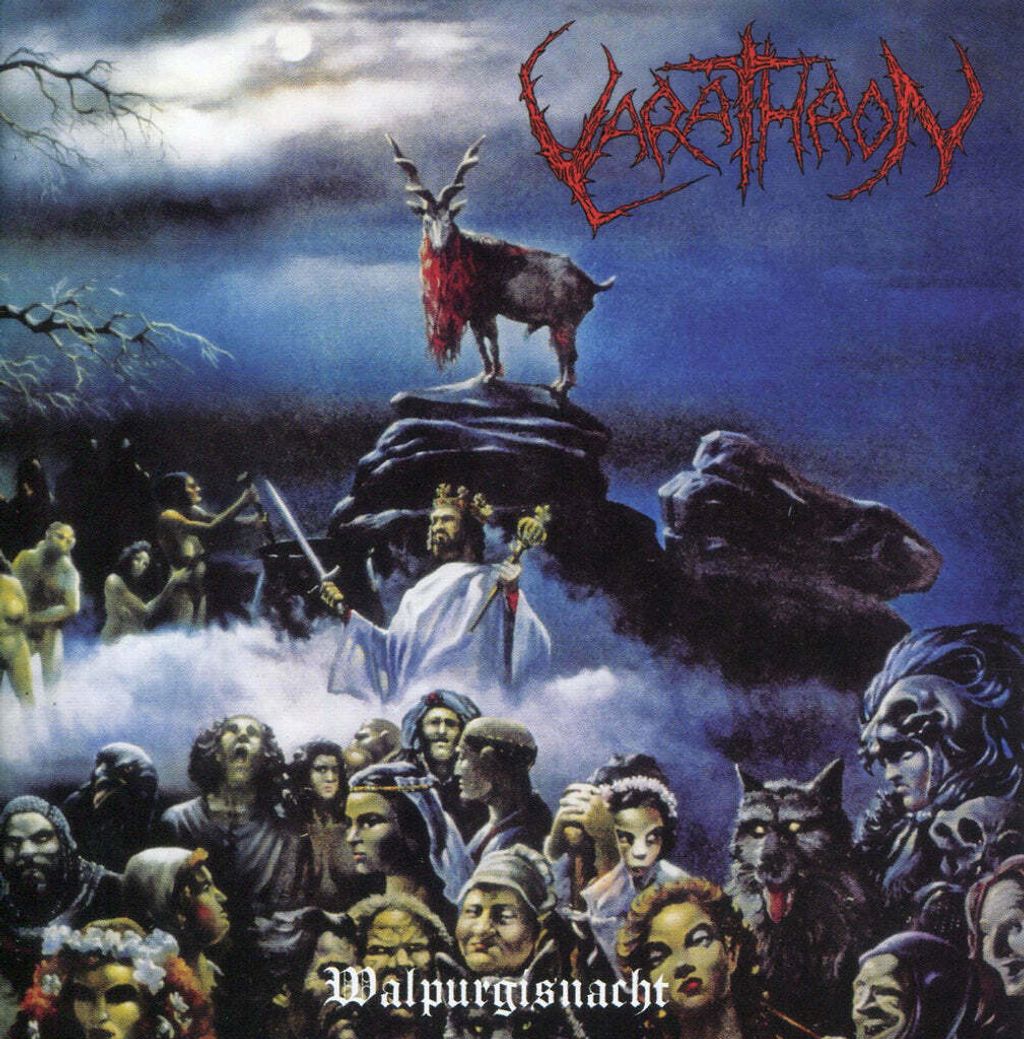 Nuclear War Now, blue vinyl, insert, Beginning in the early 1990s, a handful of musicians in Greece established one of the most distinctive and compelling regional sounds associated with the Second Wave of Black Metal. Rotting Christ laid the foundation for this particular sound, and other acts immediately followed suit helping to define the Greek Black Metal sound and bring it to prominence within the international scene. The importance of Varathron’s contribution cannot be overstated. After releasing what is arguably the greatest Greek Black Metal album of all time, 1993’s “His Majesty at the Swamp,” Varathron recorded and released the superb follow-up, “Walpurgisnacht” two years later. Since that time, the overwhelming brilliance of the former has often overshadowed the fact that “Walpurgisnacht” is a classic album in its own right. From the outset, with the opening track, “Tleilaxu (The Unborn Child),” it is clear that “Walpurgisnacht” contains all of the characteristic traits of Greek Black Metal. The riffs are somber and melancholy, yet driven by a sense of mania, often suddenly giving way to slower, majestic passages firmly set in the Hellenic tradition. Reminiscent of the early recordings of Monumentum, on “Walpurgisnacht,” Varathron skillfully weave into the fabric of the album a slightly gothic influence producing an unearthly effect in which transient, morose interludes and subtle keyboard flourishes accentuate the album’s mystical feel. In many respects, “Walpurgisnacht” displays a maturation of the band in terms of composition and production. The writing and performance is every bit as passionate as Varathron’s earlier recordings, but the album’s broader scope reflects the band’s increased ambition. The songwriting here is versatile, displaying the nuanced complexity characteristic of all of Varathron’s work. Few albums convey a sound so deeply evocative; the melancholy atmosphere Varathron achieves is virtually unmatched in Black Metal songwriting. Delicate and morose passages are set amid contrasting incendiary riffs, working together to impart the magisterial grandeur of evil and the conjuration of malefic power. As with “His Majesty at the Swamp,” Necromantia’s Magus Wampyr Daoloth produced and engineered this album, but compared with Varathron’s earlier recordings, “Walpurgisnacht” sounds richer and fuller. The production on this recording is cleaner, permitting the listener to apprehend the immense spectrum of sound presented in the songs. The lyrics of “Walpurgisnacht” are steeped in poetry, vividly evoking an alternate reality and enriching the multidimensional nature of the music. To serve that poetic end, Varathron utilized a verse from 1920 by American poet, E.A. Robinson, for the track “The Dark Hills” and enlisted the assistance of Chuck Keller, one of the greatest lyricists in underground metal, to provide the lyrics for “Birthrise of the Graven Image.” The artwork, too, is unique and appropriate; the pagan imagery of the cover painting is the perfect visual accompaniment to the music and subject matter within. When creating this album, Varathron paid attention to every detail, and the profound confluence of every element makes “Walpurgisnacht” not only one of Varathron’s most important works, but establishes this recording as one of the greatest works of an era.